The first game of the 2014 FIFA World Cup is now over, with Brazil Vs Croatia ending in a 3-1 victory for the hosts. As expected, many users are now looking for the World Cup 2014 Group Tables and we have a quick heads-up on the easiest way to check this.

You may not realize, but the best way to keep updated with the World Cup in Brazil is actually through Google. The search giant has made it easier than ever to find World Cup Group standings, results, fixtures and much more just by performing a simple search and eliminating the need for any specialist apps.

Simply search “World Cup” in Google and you’ll be given a visual look at the World Cup so far. Now that the first match is finished, if you head to the Groups tab next to Matches, you’ll see that Brazil are now top of the group with 3 points. 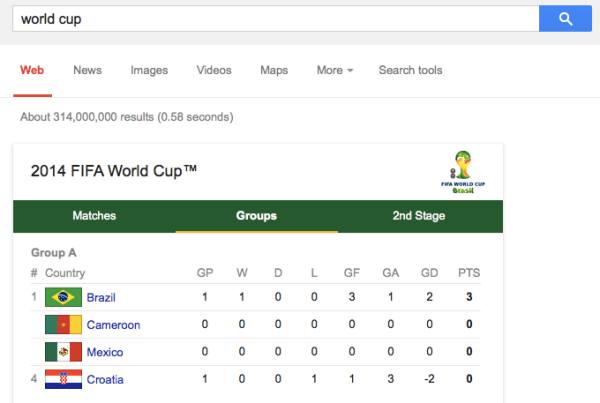 Next up is Mexico Vs Cameroon, which will get World Cup 2014 Group A really off and running. After that, the action will then switch to group B with Spain Vs Netherlands the highlight for Friday at 3pm Eastern Time.

Don’t forget we told you that Twitter are also making it very easy to check progress of this year’s World Cup in Brazil. It’s great that this information is just a few clicks away and now there isn’t really need to load up a third-party app to find the same info.

Are you using Google’s search engine to check World Cup 2014 Groups after Brazil Vs Croatia? Let us know if you have found an even easier way than Google whilst online.