Is it me or does everyone and their dog want in on the tablet market? I say this because I have just seen a company called Woow Digital has announced The One tablet. What surprises me the most about the news are two things, I have never heard of the company and the second is that it is named after what Neo becomes in The Matrix.

Vlad Savov from Engadget has come across a few images of the latest tablet device, and you will be shocked to learn that it is rumored to run on Google Android 2.3 Gingerbread. Do not think for one moment that this is one of those low spec devices either, which you will find out for yourself below. 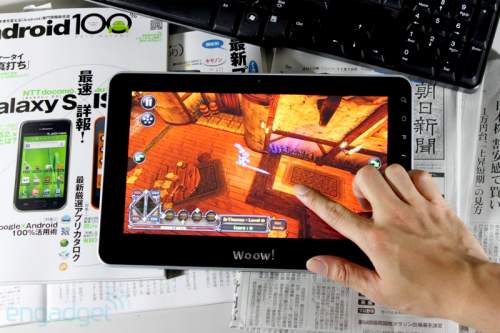 The first thing you need to know is what kind of processor The One will use; this will be the NVIDIA Tegra 2 core, the same that will be used in the Motorola Olympus. Other features include 1GB of RAM and 16GB of flash storage. All this will be housed behind a 10-inch screen, which to me seems like the perfect tablet to rival the Apple iPad.

The One by Woow Digital is to be released in Japan first for ¥42,000 ($504), after its Christmas launch it will then follow in other parts of Asia then Europe, as yet there are no details on a U.S. release. How do you think that this upcoming device will compare to some of the other tablets about to hit the market?