The Women’s World Cup 2015 game and TV schedule now enters the final this weekend with live coverage offered by the Special Broadcasting Service Corporation, or also known to most as SBS On Demand aiming to service fans in Australia. While this is the target region, you won’t need to live in Australia to be able to download a high resolution Women’s World Cup 2015 schedule in PDF file format, which has been publicized on their sbs.com.au site throughout the event.

We featured a little look at the official match schedule and game times below, but this is a high-res PDF from the FIFA website found in full size right here. You can see we are now at the Women’s World Cup 2015 final on Sunday, July 5 2015 in Canada, or July 6 for other parts of the world with the Android and iPhone apps bringing live streaming as well. 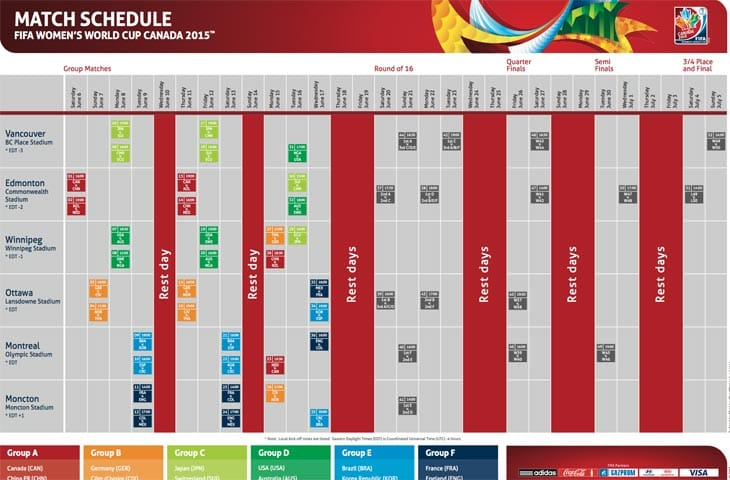 Women’s World Cup 2015 final time for schedule – if you are in Australia, then the start time is 8:30am for the final on Monday that you can see in this SBS PDF for their live TV schedule. Those of you in Canada will see the action start today at 4PM local time, or can watch live across the United States at 7PM EST.

The US Vs Japan Women’s FIFA World Cup final can be accessed through FOX Soccer 2Go apps on Google Android and Apple iOS app stores, which includes live coverage, score results, and of course the full schedule for today. Any problems and streams crashing should be reported directly to the app developers, but feel free to leave problems below in our comments as well.

Feedback we received from those using FOX Soccer 2Go include a number of problems, but in most cases these were due to users not being in the correct region and not able to stream due to licensing restrictions, or complaints in regard to Android users wanting a tablet version. This is especially annoying some people when they see iPhone and iPad versions for iOS. Will you be watching the Women’s World Cup 2015 final and if so, who do you think will win?