Like many before it, the WiziWig sports streaming website had been taken down due to new laws and this started users looking for a WiziWig alternative in 2015. The likes of Cartoon HD, The Pirate Bay, PopCorn Time, Kickass, and many others have been taken down either directly, or voluntary.

Many of our readers would have seen the WiziWig message at the start of 2015, although those that haven’t can see the official statement below. It basically explains why the WiziWig website had to be shut down, which was due to “new laws in Spain” that came into force this year. 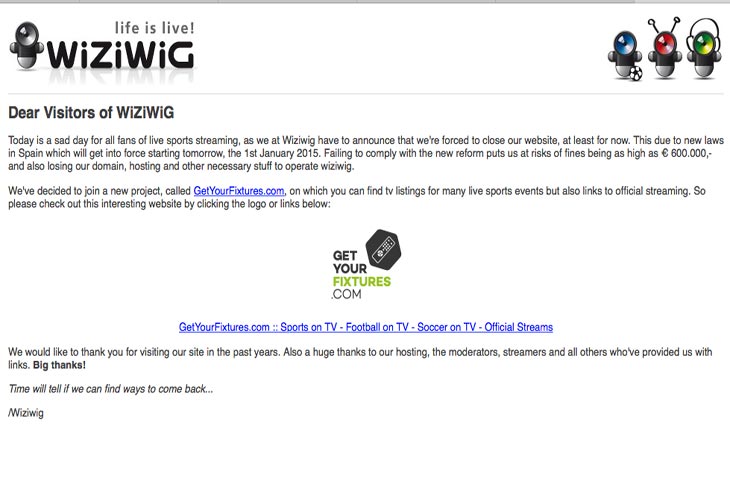 Brand protection and users hunt WiziWig alternative – It’s understandable why any company would want to protect its copyright and brand, but not all Internet users see it this way. In fact, there was a massive jump in searches for WiziWig alternatives the moment this sports video streaming site was closed. They followed the change in law due to wanting to avoid massive fines.

Those behind WiziWig went on to join another project called GetYourFixtures.com, which aims to help users find information on TV listings while keeping within the fine line of the law. They apparently only link to “official streaming”, so feel free to leave a comment on their service below if you have used it, especially if you were a moderator or streamer from WiziWig.

Do you think it’s time to pay for sports streaming only, rather than hunt a free alternative online? Some of Product Reviews readers have said they are fed-up with services being taken offline, and now state they will start paying rather than wasting time hunting every year. Time costs money as well, so we can understand how a lot of time can be spent hunting for a sports and movie stream, which would be cheaper in time/money if purchased. Again, not all will agree with this, but feel free to share comments below.

Whatever happens moving forward, you can expect further free streaming services to be taken offline as more laws are passed. In the end, you are most likely going to have to pay or watch official streams for free that include adverts. Would you prefer to have advertisements rather than pay monthly fees?