You may remember last year when we posted some details on the EyeSpy247Ext, which is an outdoor wireless IP camera. This was quickly followed up a month later with a hands-on review of the same device that impressed us in our tests. We did point out the need to consider dedicated DVR solutions, although these would not be for the user on a budget.

EyeSpy247 offers solutions that are perfect for the buyer not able to pay for packages with a number of cameras, wires, and a DVR. Having personally tested both of these solutions, we can see a need for both in the CCTV market. Having a DVR with 8/4 channels is great, but then you have the task of running wires to the DVR box and making sure you have the correct hard drive installed that runs cool enough. We’ve had hard drives die on us for getting too hot in the past. This solution can be compared to those offered by EyeSpy247 like the product we tested over the last week or so; no wires are needed here as it operates over a 802.11b/g WI-FI network or wired LAN, which could be run via electric network plugs. This solution costs a lot less but also has its drawbacks, which include what’s possible for outdoor cameras. 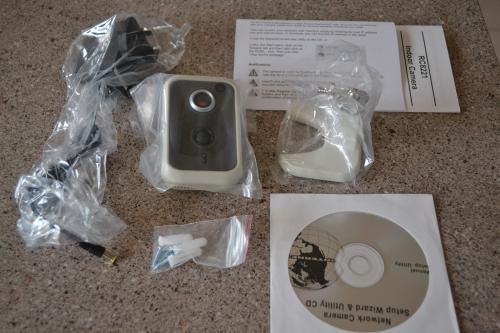 Over the last couple of weeks we’ve been playing around with the “HDSD” from EyeSpy247. The single camera was tested indoors, the purpose it’s designed for, around the home and office. You can see a video below this article that shows footage taken using the EyeSpy247HDSD camera, and as you can see, video is extremely clear when taken in the daytime or at night. 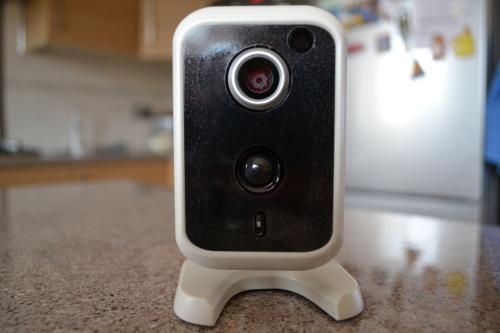 There are a number of improvements on the HDSD when compared to the last model we reviewed (EXT), which most notable is high definition video. We knew the model reviewed this week had HD video, and that it would obviously be clearer than our last camera from EyeSpy247, but when we tested the video quality, it really impressed us. 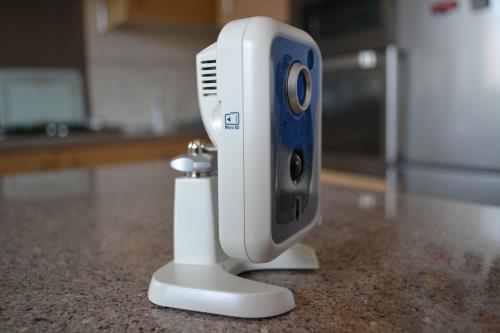 There is nothing worse than grainy images when watching back a CCTV recording, trying to make out faces but the HDSD improves on this massively with the inclusion of high definition. We really couldn’t recommend one of the other EyeSpy247 models after testing the HDSD, which is the only one to include HD.

Other improvements on HDSD include a 15 metre night vision distance, up from 10 metres on the EXT, x20 digital zoom that increases from just x8 on the EXT, and Micro SD recording means you can capture video direct to an SD card. Alarm input and output was also missing on the EXT, although that device does trump the HDSD on one feature, and that’s outdoor recording. Sadly you can only use the EyeSpy247HDSD indoors. 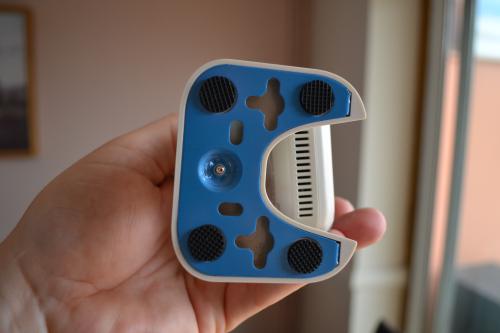 As you can see in the photos on this page, you get the normal included documents and adapters, which includes screws and software on CD. Those that prefer reading about the technical specifications can jump straight into the PDF file that’s available to download on the official website, found here. You can also see some of those specs in the image below. 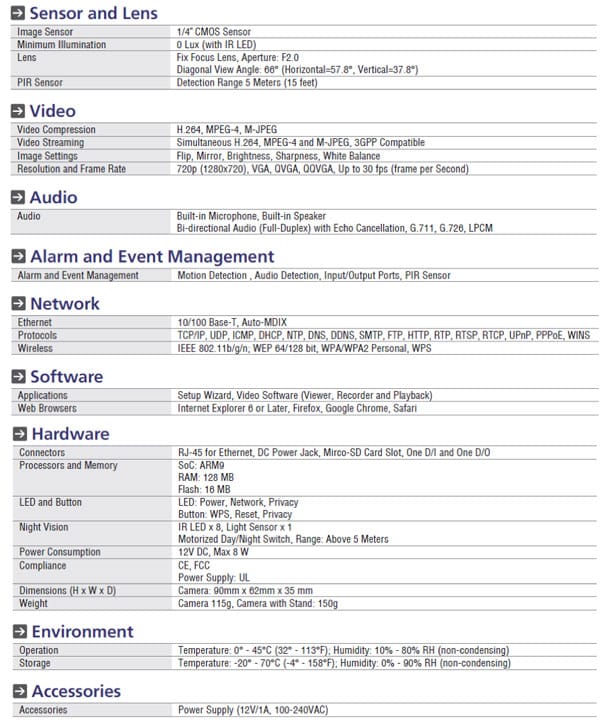 If you hate wires and need an indoor solution then you’ll not find much better than the HDSD. The IP camera can stream 720p high definition video at up to 30fps, and this can even be done while encrypted. 2 way audio is pretty cool as you can imagine how handy that can be around the home or office, and automatic day/night switching and a weight of just 115g means you can set the camera up, and let the device do the job with very little effort. It’s nice to see that Windows, Linux and Mac OS X are supported, which can be rare with some devices. 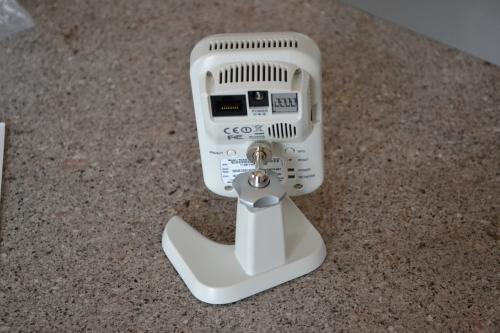 Most web browsers allow for remote viewing of the camera, and this includes Chrome, Safari, Firefox, and Internet Explorer. Those of you that like to video CCTV video on a mobile phone will be glad to know that this is possible, especially easy on Android and iPhone. If you really want to keep connected while on the move, then you’ll love the inclusion of email/SMS event alerts. 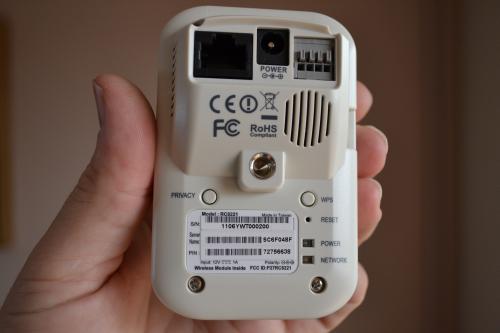 The camera was a breeze to setup and did just as you expected, although we now wait for eyespy247.com to launch a high definition camera that works both indoors and outdoors. With SD cards increasing to extreme sizes over 32GB, we may have to reconsider the idea of having DVRs, although this would not be an ideal solution when recording outdoors. With this in mind, the HDSD is one of the best indoor solutions you’ll find. 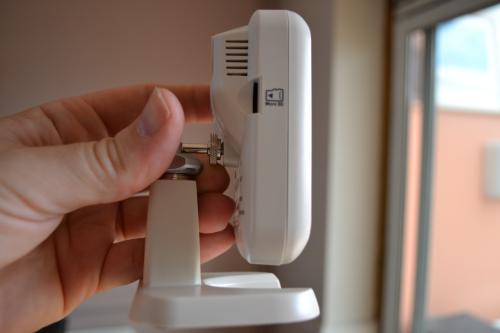 Check out the video below and let us know what you look for in a security camera. Feel free to visit eyespy247 here to see their full range of options. 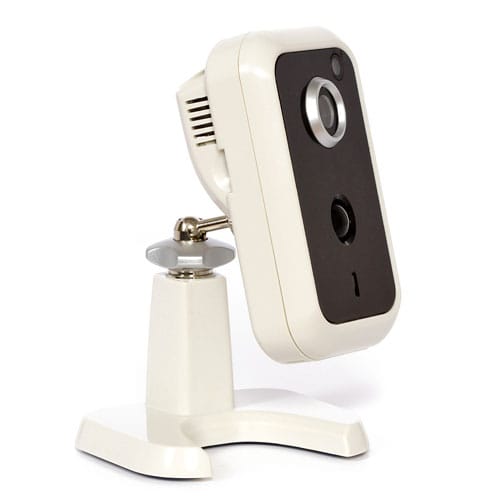 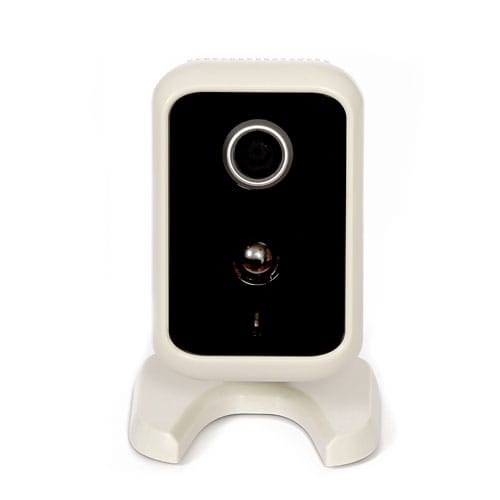 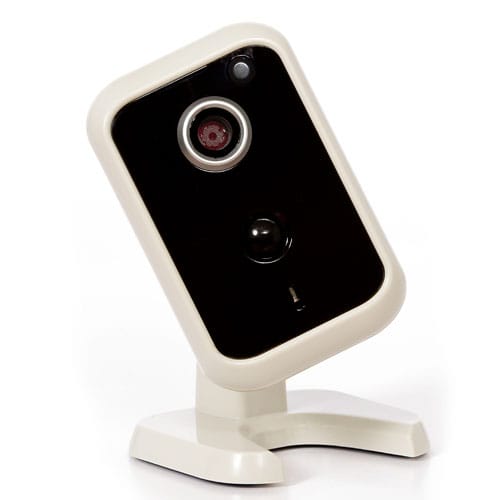