If you are in possession of a Windows Phone 7 handset, you are probably in a state of panic if your device has stopped working as a result of a recent update that Microsoft has pushed out to all devices.

As reported from RedmondPie, the minor update was supposed to get devices ready for this major update planned in March, but Microsoft has a huge problem on their hands now after some WP7 owners have been complaining about bricked devices.

We’re not sure what devices specifically are affected by this problem, but judging by forum messages we’ve been reading, it seems as if the Samsung Omnia 7 handset is the worst affected.

Microsoft has yet to announce a statement on the situtation, but you’ll be pleased to know that there is a temporary workaround which you may want to try if you currently have an unresponsive handset. 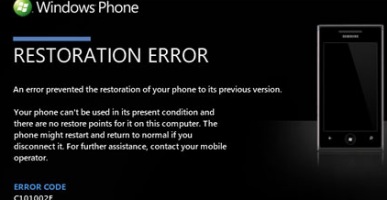 The steps are listed over at RedmondPie and it involves the execution of a few simple commands, for example – like holding down a few buttons on handsets and changing a few settings in the menu.

If you are affected by this problem, we’d appreciate it if you get in touch with us and tell us which handset you own. We’ve found a related article for you to read over at Neowin, with plenty of user comments.

Is your WP7 device bricked? You may also want to check the Official Twitter support page for Windows Phone 7 devices regularly, to see if Microsoft provide any tips to help on the situation.