Microsoft released its latest Windows 10 update with build KB3081424 that went live for download about 15 hours ago. Many of our readers are only just seeing the Windows 10 KB3081436 update on August 12, 2015, as such you might be wondering what’s in the release notes and of course need to know about the changes.

Since the original launch, we have seen Windows 10 update failed messages, downloads getting stuck, and even restart loops after boot-up problems, but there’s no evidence of these with the Windows 10 update today.

Windows 10 KB3081436 cumulative update – each package will bring the previous fixes, and this is why they are cumulative updates within each download you install. The latest KB3081436 update includes fixes seen with KB3081424, although Product Reviews received reports about problems causing an update loop with that package and this included using the manual install file. 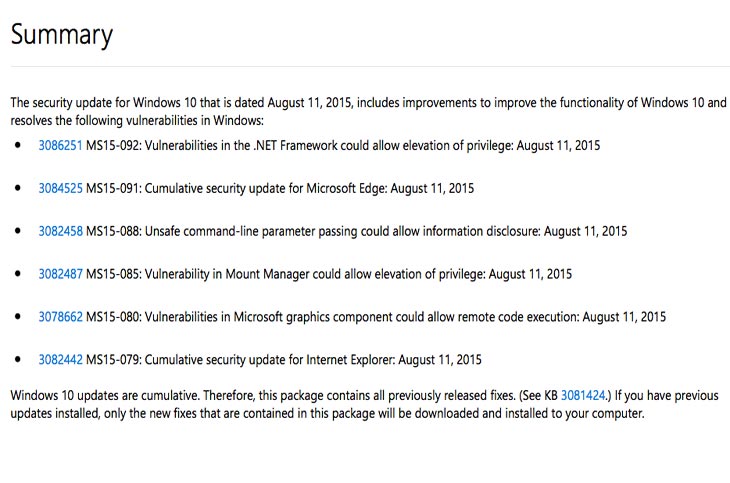 Dates with file version changes can be seen in with Windows 10 security update changelog for KB3081436. This page also includes a breakdown of the package, which features a fix for .NET Framework vulnerabilities, security update for Internet Explorer and Microsoft Edge, a fix for unsafe command-line parameters, and further vulnerabilities fixed in Microsoft graphics component and Mount Manager apps.

Did you have any problems when installing the Windows 10 KB3081436 update or during download? Hopefully things went better than last time, but if you did see the download go slow or updates get stuck, then leave a comment detailing any problems you met.