It was always going to happen, the Windows 10 Anniversary Update getting stuck for some users, as this also happened to them when the previous version was released a year ago. This would happen during different stages of the install process, and so it does seem as though history is repeating itself.

There could be so many reasons why this is, although one of the main ones has to be that 350 million Windows 10 users are trying install the Anniversary Update, and that Microsoft’s servers are just unable to cope with such huge demand. The list of problems related to the new version getting stuck does seem to be piling up, which you can see in some of the Tweets we have included in the image below. 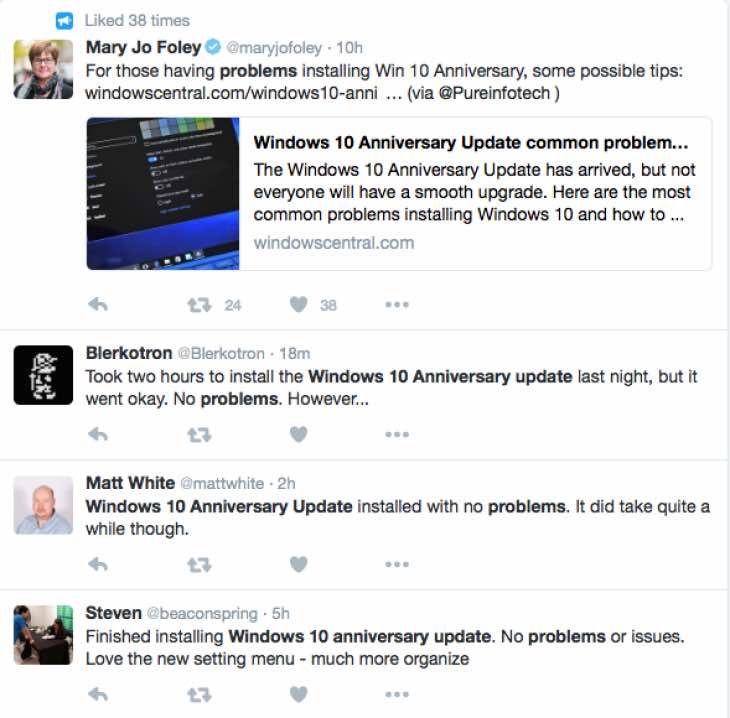 Some users were reporting that it took two hours to download Windows 10 Anniversary Update, although it does seem to be ok now, although this is not the case for everyone. However, we suspect that these issues are no longer down to huge demand on servers, but more so other factors have now come in to play.

Is the Windows 10 Anniversary Update getting stuck for you today? We know that there are always unexpected bugs, errors and other issues when installing an updated version of an operating system, although it’s not always down to the software itself. Outdated drivers couldd be an issue also, and so you always need to make certain you have the latest drivers installed before even trying to update to the Anniversary edition.

There are always various ways in which to fix these issues, although the first rule of thumb is to investigate what the Windows 10 Anniversary Update error codes are, which this article has already done for you.

Like we say, read the article that we have linked to above, and you should get the answer on how to fix those install problems.