Nintendo may have some new problems on their hands in relation to hacking attempts which we told you about earlier, but now it’s time to get back to happy thoughts and more specifically – the excellent Wii U Virtual Console. Nintendo’s emulation service is now available to use for Wii U owners in America and Europe and Nintendo has released a teaser, giving UK Wii U owners a glimpse into some of the games that will be available to buy soon.

It’s not a free service, but it is a very convenient one for those that love playing retro classics from the original NES and Super Nintendo. It is a bit frustrating to see that the Virtual Console lineup will differ though, depending on whether you are based in the US or UK.

Although the overall lineup may end up being the same, release dates are almost certain to vary between the two regions so there will definitely be one disappointed side of Wii U owners who are waiting for the same content to arrive. To give you an example, Nintendo has released a new gameplay preview, showing titles that are on the way to the UK Virtual Console, with no information at the moment on whether they will show up on the US Virtual Console. 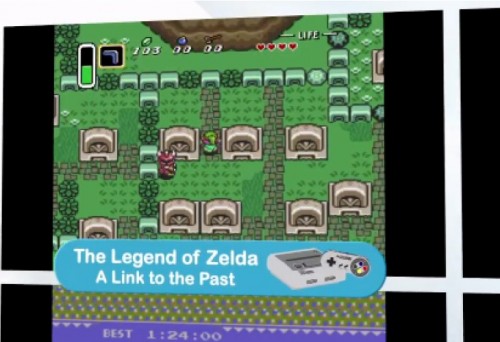 The list is pretty mouthwatering as well, with the likes of Street Fighter 2, Super Mario World, Super Ghouls n Ghosts and wait for it, The Legend of Zelda: A Link to the Past all on the way to the UK soon. Prices will vary depending on which game you are buying, but expect Zelda to be available for around £5.49 in the UK and $8.99 for those in the US.

The beauty of the Wii U Virtual Console, as opposed to the Wii VC is that you can now take your retro games away from the TV and continue playing on the Wii U GamePad. The Wii U version also supports instant Restore Points and also the ability to map out custom controls if you don’t like the default setup.

Watch the exciting trailer above and let us know if you plan to buy some of the classics from the Virtual Console. At the moment, there’s no set release dates but we’ll keep you updated when Nintendo releases the information.