If you are just picking up your shiny new Nintendo Wii U console at a glamorous launch event, you may have noticed one or two whispers that are emerging about the day one Wii U patch that the console needs. Unfortunately, it isn’t good news as it has been confirmed that the Wii U day one update is 5GB in size, which could be terrible news for those planning to pick up the Wii U Basic Pack.

If you didn’t pre-order a console yet, we would definitely advise you to reconsider your plans on getting the Basic version for $299.99 which only comes with 8GB of flash storage. This update is going to cripple your storage options after installation, with only a mere 3GB left for your own usage.

Nintendo appears to have been a bit naughty indeed by not revealing the true size of this update prior to launch and as a result, consumers are not too happy on Twitter after discovering this issue when powering on their Basic packages for the first time. It is bad enough that the system doesn’t come with the Nintendo Network out of the box, but Nintendo should have really advised consumers beforehand on the update size. 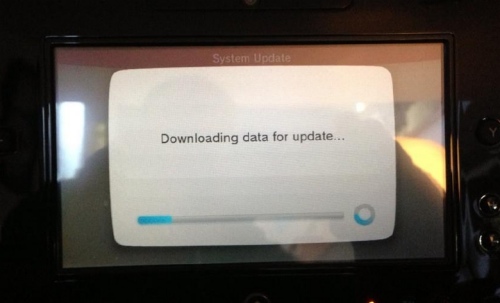 5GB is hefty amount for any system update and depending on your internet connection speed, you could be waiting up to 4 hours for the download, as well as added installation time before you can actually start playing games. If you have been keeping an eye on Wii U launch issues, you may have probably heard already that one user has managed to brick their device – by turning off the console during the update. It goes without saying that you really don’t want to be pulling a similar stunt during your update.

We can feel the sigh of relief in the air for all those gamers who opted for the 32GB Deluxe model instead at $349.99. What are Basic consumers going to do with just 3GB of storage left though after installing this meaty patch update? No doubt they will be looking for Nintendo to provide some clarity on this, as they are surely entitled to feel a little bit aggrieved over Nintendo’s silence.

Do you have a Basic or Deluxe Wii U? How long did the update process take for you?