There is undoubtedly a lot of interest in the release date of the highly anticipated Wii U console. Nintendo has traditionally stayed silent on the issue until their New York event, but we have seen a whole host of release information prematurely leaked in the meantime, which probably deserves a peek before the official festivities begin.

It was only a few days ago when we told you about a potential November 11 launch date and three pricing options starting at $249 for the base console, increasing to $349 with a suggested bundle. While $249 is obviously a very reasonable price indeed and one that you wouldn’t mind paying at all, there is more rumors to add into the mix.

A French retailer has said that the console will instead release on December 7 and will be priced at â‚¬349, which for comparison sake translates to roughly £276 and $440, as noted by WeGotLife. It’s highly unlikely though that Nintendo are going to price their Wii U over $450 as nobody in their right mind would pay that amount, so don’t take that conversion to heart. 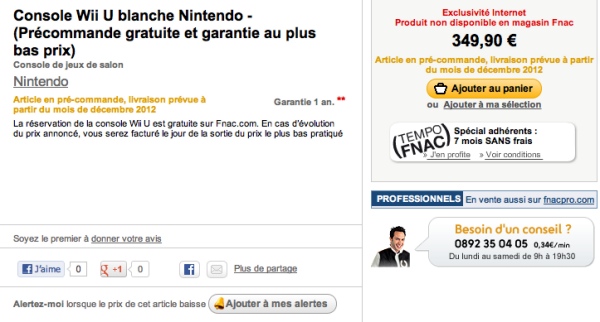 Unlike other Wii U release rumors, this same French retailer is now taking pre-orders for console, which you’ll find online at their website here. You may also be interested to know that they are also taking orders for the impressive ZombiU launch title, to which they’ve set a price of â‚¬70.

Are you getting tired of all of the numerous dates and prices circulating online? Having said that, this is the Wii U launch we’re talking about and it is a pretty big deal seeing as it’s the first next gen console to launch ahead of upcoming next gen efforts from Sony and Microsoft.

For our European readers, what are your initial thoughts on a suggested price of â‚¬350? Would you be happy to pay this amount if Nintendo confirms it at their September 13 event or not?