When Ubisoft confirmed that Rayman Legends had been delayed on the Wii U due to the game going multiplatform, the studio also revealed that the extra development time would allow them to put additional content in the game. This week, we have one example of that to show you, with an excellent gameplay video showing off one of the new Rayman Legends boss battles that will be available on Wii U.

Rayman Legends has already been given a new release date of August 30 and PS Vita owners this week learned that they will be getting a version of the game as well. We often see in the industry how delays can actually make a game better – look at GTA V for a perfect example.

Now Rayman Legends looks to be joining that list as well. It’s easily the most anticipated platforming game of 2013 that we can see, and Ubisoft has given us another indication of what is in store for us when the game is finally out. A Madman’s Creation will be a boss level in the game which will see Rayman do battle against a fearsome mechanical dragon. 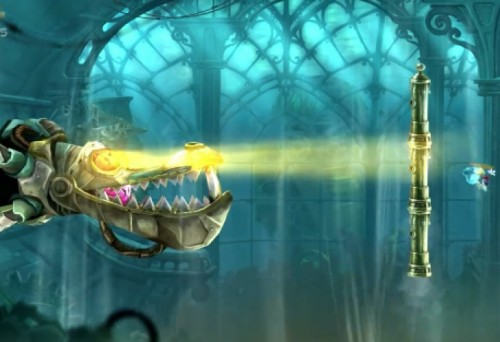 Players will have to carefully maneuver between two small ledges, dodging the dragon’s attacks until you get an chance to attack the dragon’s weak spot yourself. The graphics and animations are simply stunning as usual and another timely reminder that the Wii U version is still arguably going to end up the best console version – running at 1080p and 60FPS.

Hopefully Ubisoft will be mixing their boss battles up a bit, so we don’t see a repeat formula throughout the game. We’re definitely loving the musical aspect to the game as well, find some clips on YouTube for an idea of what we’re talking about. Watch the boss battle above and let us know what platform you will be buying Rayman Legends on.