We have seen plenty of criticism directed at the Wii U in recent weeks, some of it fair but probably most of unjustified. This week, it’s nice to bring you a positive spin on Nintendo’s upcoming console, with one source praising the system and Nintendo’s efforts in attempting to win back some of their hardcore audience that they perhaps lost with the first Wii.

You may remember a recent backlash against the Wii U over the GamePad’s lack of support for voice chat using the built in microphone. Consumers who want to play FPS games on the Wii U with voice chat will instead have to plug a third-party headset into the GamePad’s included jack, even if you opt to play using the Pro Controller accessory.

While that is a debatable decision from Nintendo, Gearbox Software boss Randy Pitchford has actually praised Nintendo’s touchscreen GamePad by stating in a recent interview that the GamePad is ”the best controller Nintendo has ever given us for playing hardcore games.”

He was speaking to Joystiq when he made his comments and added that the GamePad is ‘perfect’ when playing Aliens, in reference to the upcoming Wii U version of Aliens: Colonial Marines, which will include some unique GamePad features exclusive to Nintendo’s console. Just one example that Wii U gamers will get is the ability to use the GamePad as an Aliens motion tracker, or an in-game map as well – a classic bit of multitasking. 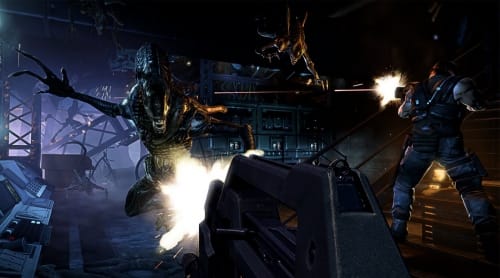 It’s also worth pointing out that Gearbox seems to have put a lot of effort into making Colonial Marines the prioritized version. You may not be aware, but the Wii U version is out this year alongside the console’s launch, but the Xbox 360, PC and PS3 versions are not going to be available until February next year.

We’ve spoke about the change in developers mindset when deciding to embrace the Wii U with the likes of Bayonetta 2, now it looks like Aliens Colonial Marines is another game that may be worth getting on the Wii U ahead of other platforms. Aliens Vs Predator was a disappointing game, we just pray that this game has been done right as it’s an awesome franchise to work on.

Are you starting to see signs as well, that Nintendo are on the right track in terms of hardcore gaming on the Wii U? Or do you think that despite the praise, the console will suffer the same fate as the first Wii?