The Nintendo Wii U has some fantastic looking games on the horizon and one of them has to be Rayman Legends, which has now been confirmed as an exclusive title to Nintendo’s new console. PS3 and Xbox 360 owners who loved Origins are obviously not happy about the decision, but we’re a bit more disappointed that the game is not scheduled for an appearance on the PS Vita in some form.

Ubisoft has recently been talking about the their reasonings behind bringing the game to the Wii U and not to other platforms like the PS3 and Xbox 360. Rayman Legends if you are not aware, features key elements of gameplay that requires touch input and as you can imagine, it’s obviously difficult to replicate this experience on other consoles – making the Wii U unique in that aspect.

Ubisoft has basically said that they do not want to ship half the product to Xbox 360 and PS3 users, just for the sake of keeping them happy. It is the touchscreen elements that you see on the GamePad and in co-op mode that has become a priority for Ubisoft, which we understand – but what about the PS Vita? 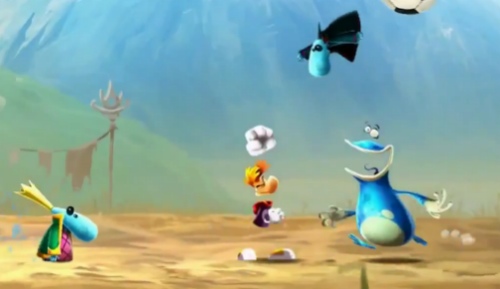 We have seen with Rayman Origins that touch input is no problem at all and it remains one of the standout titles on the handheld and a must buy for all Vita owners who haven’t played it. Rayman Legends may not be possible on the likes of the Xbox 360 and PS3, but could Ubisoft perhaps make a solid port of the game on the PS Vita, with all of the touchscreen features in tact?

The PS Vita still badly needs more games and the announcement of a Rayman Legends game would surely boost morale for those consumers still wondering if they made the wrong decision in purchasing at launch. Black Ops Declassified is going from bad to worse in our opinion and Sony really needs to get their focus back on and start churning out some true console quality games on the Vita.

Are you a big fan of Rayman? Let us know your thoughts on Rayman Legends as a Wii U exclusive and whether you would like to see it on Vita someday as well.