There hasn’t been many new peripherals released recently for the Nintendo Wii, but a clever new tablet has become available which was designed exclusively for the console.

Chad Sapieha of The Globe And Mail is reporting the device released by THQ, is a plain white slate that has a wired stylus attached to it, and allows kids and adults alike to indulge into their creative sides. It was found that it takes a while to get used to the stylus, but once this is achieved it is very precise in interpreting what you are trying to draw.

The $69.99 tablet is bundled with uDraw Studio software which is not a game but a tool for kids to color and draw pictures. Users have a choice of custom colors from a palette, range of stylus nibs, deploy stamps, switch between free drawing and straight lines, and add post-painting effects like negative film and sepia tones. 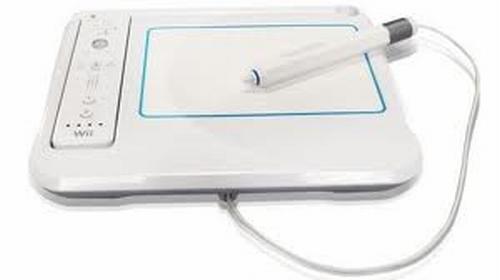 Younger children are catered for with the coloring mode, where black and white line drawings can be colored freehand or using the fill function. Once masterpieces are completed users can take snapshots of them and save them to an SD card. This allows them to be printed or viewed on a PC display. The article goes on to review the other software currently available for uDraw.