We have some exciting news to bring you now, as it has been reported that the highly anticipated White iPhone 4 device has made an appearance at an Walmart store in the US – is a release date finally around the corner?

According to this report from PocketNow, a new photo has emerged which shows the white device on sale in a Walmart store. Whether it is on sale now or a preview of things to come, remains to be seen. 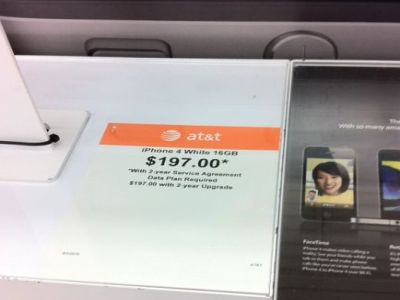 As you can see from the picture, the white model is clearly listed at the retailer and comes with a $197 price tag for the 16GB model, slightly lower than the $199 that Apple charges for the iPhone 4.

This solitary picture does seem a bit strange though, considering that Apple still has the white iPhone 4 listed as ‘currently unavailable’ – the same message which has been there for months.

What are your thoughts on this? Do you think the white iPhone 4 is coming soon? Don’t forget that we are now closing in on the ‘end of September’ release period.