Here is some exciting news for those of you wanting to get your hands on a white iPhone 4. We have been keeping you up to date with delays to the imminent release and rumors of the date being close. Now it seems the release date could well be closer than we initially thought.

This news is thanks to an article at Engadget which features a photo of Best Buy seeming already prepared for their first batch of white iPhone 4s. More specifically the image is of a labeled price tag for the device.

The image came from an anonymous tip and was apparently taken at a Houston, Best Buy store. You can view the image below. More can be read about this at Engadget, who had previously come across evidence similar to this when an image of an inventory list from Vodafone Germany appeared. 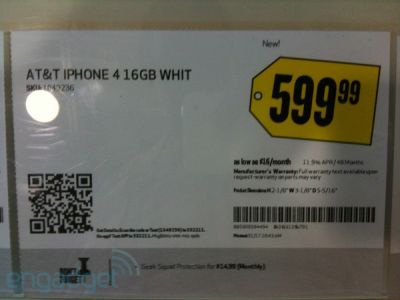 Now with still no official word of a release date from Apple we can only assume that it’s close, but with evidence like this appearing now, it can’t be too far away, can it?

Will you be getting a white iPhone 4? When do you think it will finally be released?