We have some interesting news to bring you now, as it has been reported that there are apparently genuine White iPhone 4 handsets which are currently available to buy in China for premium prices.

As reported from RedmondPie, White iPhone 4 units are being sold in some areas of China, apparently with the label ‘for internal use only’.

Furthermore, RedmondPie states that the handsets are locked to AT&T and that they are running iOS version 4.1. Judging by the accompanied pictures, it certainly looks like these pictures are the real deal, even more so when you find out how much they are selling for.

If you manage to track one down in China, you’ll be greeted with a rather hefty price tag for one. The 16GB version is going for a whopping $828 to $1024, while the larger 32GB model is significantly more expensive, although no price was mentioned.

Could this be an indication that Apple are still planning to release them in the near future? Check out the pictures over at RedmondPie and let us know your thoughts on the news. 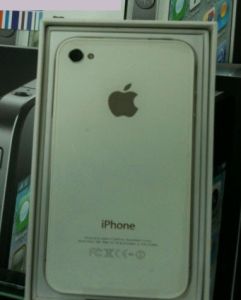