At the start of the month we told you that a white version of the popular Samsung Galaxy Nexus was coming soon, possibly to the UK first before any chance of it appearing in the US. Now we have a new image of the white version in the wild for you to take a look at, suggesting that it will be available sooner rather than later.

If you are hoping to get this in the US, you may be prepared for a long wait since it may not be appearing in the UK until March at the latest. This means that a US release may not happen until a month later, especially if Samsung follow the same release pattern for their launch of the original Galaxy Nexus which hit Europe over a month before the US got their hands on it.

As for the new pictures, they come courtesy of Italian website HDBlog, who seemingly are already in possession of a white Galaxy Nexus, no idea how they managed to get hold of one though. The site are known for their Samsung leaks, so for those of you who are doubting the authenticity of the pictures, we believe that they are in fact the real deal.

As we showed you earlier this month, the white Samsung Galaxy Nexus will not be completely white. The device will feature a ‘snow white’ back casing, but the front of the device will still feature its regular black stylings. For those of you that like to own a smartphone with an element of sexiness, we have a feeling that the white Galaxy Nexus may be for you. We’ve included a new shot of the device below, but you can check out a whole unseen collection over at HDBlog here.

Are you interested in picking up this white variant, or will you go for another device on Verizon – like the Droid 4 or Droid RAZR Maxx which we gave an update on just earlier today. 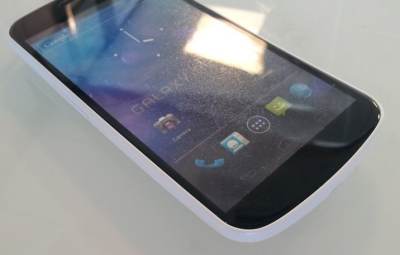