We have just informed you that the Galaxy Nexus is now officially set for a release on Thursday 15th December, but now we switch our attention to another handset that will be available to buy – a white flavored Motorola Droid RAZR handset.

The standard black model is already to available to buy on Verizon of course, but the addition of a second white model is now a very popular alternative for smartphone lovers when it comes to choosing which color suits them best.

We previously gave you an idea of what the white Droid RAZR could look like after some render images were posted online, but after some official shots that have now sneaked out, we can tell you that the final result may not be what most of you were expecting to see. Rather than a full coat of white for the Droid RAZR, it looks like the new version will only feature elements of white, and still retain black features – the back casing for prime example.

To give you an idea of what we mean, we’ve included a sample image below courtesy of Droid-Life. It almost acts as a ‘white bumper’ we have to say, however we are still loving the overall look. It’s always good to be different in our books and Motorola’s new take on a typical white smartphone will certainly get people talking. If we had to choose between this and the regular black model, this new offering probably just edges it. Don’t ask us why, but there’s something which is very sexy about this white Droid RAZR.

So just to remind you, this new version of the Droid RAZR should hit Verizon stores on Thursday, alongside the Galaxy Nexus. Which one would you choose out of the two? For those of you that have just forked out on a regular Droid RAZR – are you tempted to trade in? 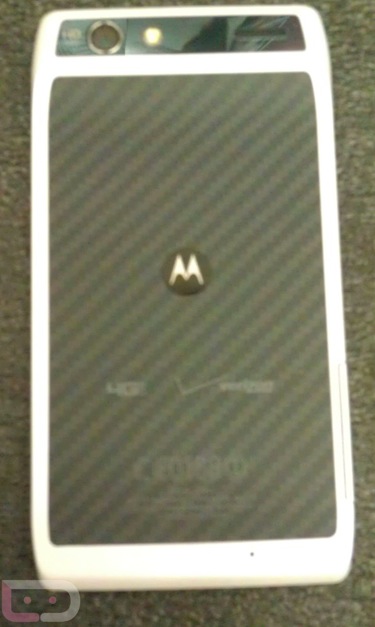