You might be surprised to learn that there is still huge a percentage of smartphone users that have not heard of Whatsapp, and it’s easy to see why this is one of the best Android apps for messaging, if not the best. Maybe that will get your attention as to who this San Francisco startup is?

It wasn’t long ago that Whatsapp (often referred to as Whats app) came under the radar of Google, who had tried to purchase the app for $1 billion, but you’ll be pleased to learn that the offer was rejected. It’s always nice to hear startups like these become so popular, so there is hope for other developers out there. 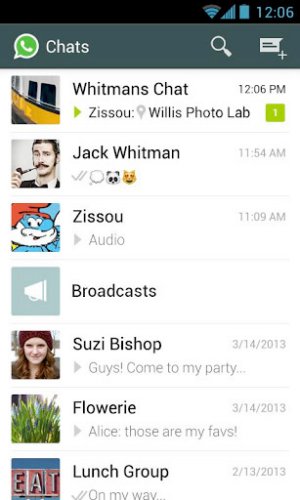 What has made Whatsapp so popular is that it’s an app where you can not only send texts, but also images, videos, and even call via Wi-Fi, and it’s ideal for younger users because it’s fun to use.

However, it’s not all positive though, as like similar apps there have been a few issues with privacy and security, with some authorities alleged that the app violated international privacy laws because users have to upload their entire list of contacts. Well, this has not stopped me, as I cannot see how I did without Whatsapp for so long.

We do find it strange how you can take a startup and create a 40-strong workforce in San Francisco and have done so with not much hype. Maybe it’s a mix of keeping a low-profile, as well as taking advantage of the smartphone revolution why Whatsapp has exceeded 200 million users a day, with more than 20 billion messages being sent each and every day.

There are other apps like this on the market, such as Viber, which claims to be a free service, but like the old saying goes, “Nothing comes for free.”

If you ever wanted a text message alternative, then Whatsapp has to be it, and with rival apps on the Play Store, this is the only one that acts like an SMS replacement.