The big story of last week was the massive news that WhatsApp had been acquired by Facebook in a deal worth $19 billion. Some users have been skeptical so far and when WhatsApp went down over the weekend, many people blamed Facebook for the outage.

On Saturday WhatsApp went down globally for around 2 hours, with users not being able to connect to the service. There were big fears that Facebook had been interfering with the instant messaging service and were deliberately sabotaging it so that people needing to speak to their contacts would use Facebook Chat during this time period instead.

Both Facebook Chat and WhatsApp provide free unlimited chat, where text messaging is not always free if you are not on a contract or plan. Facebook has received a lot of negative reaction since the deal was announced, with critics believing the deal to be an aggressive business move to destroy WhatsApp for the benefit of their own services. The meme below sums up the general attitude of some angry WhatsApp account holders. 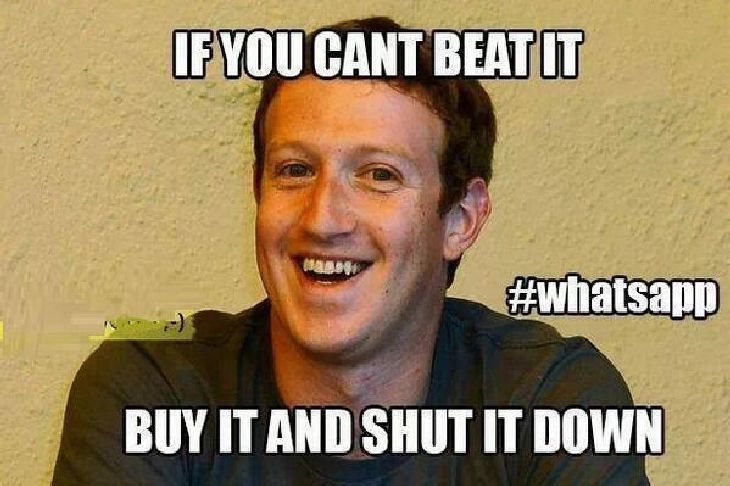 Whilst the outage was occurring on Saturday, WhatsApp confirmed via Twitter that they were “currently experiencing server issues.” This sparked the user backlash and mass conspiracy theories until service was resumed a few hours later. WhatsApp then tweeted that they were “so sorry for the downtime” after they were able to get the system back online.

Numerous WhatsApp groups have been started in protest against the Facebook takeover, such as ones claiming to prevent subscriptions. This will encourage spammers and scammers so we encourage our readers to be diligent, there have been messages going round which have ask users to forward the text to all of their contacts in order to stop their account from being deactivated.

Whilst some groups will genuinely want to demonstrate, there will be others looking to gain from a potentially chaotic situation. What are your thoughts on the WhatsApp takeover, do you see anything malicious on the part of Facebook here?