We are just hours away from the highly anticipated FIFA 16 demo release time for UK and US. We know that many of you are asking what time does the FIFA 16 demo come out on September 8, but sadly EA has not given an exact indication on this.

The likely reason for this, is probably due to the fact that it is out of their hands. September 8 is when the FIFA 16 demo release time on PS4 and Xbox One should be and don’t forget that unlike last year – both the PlayStation Store and Xbox Live Marketplace updates will happen on a Tuesday and not split up on Wednesday for those in the UK.

That means that the demo should be coming out when the PS Store and Xbox Live Marketplace updates for the week as normal. What we can say though, is that last year Xbox gamers received the FIFA 15 demo before PlayStation and the demo hit the Marketplace around 2pm in the UK. 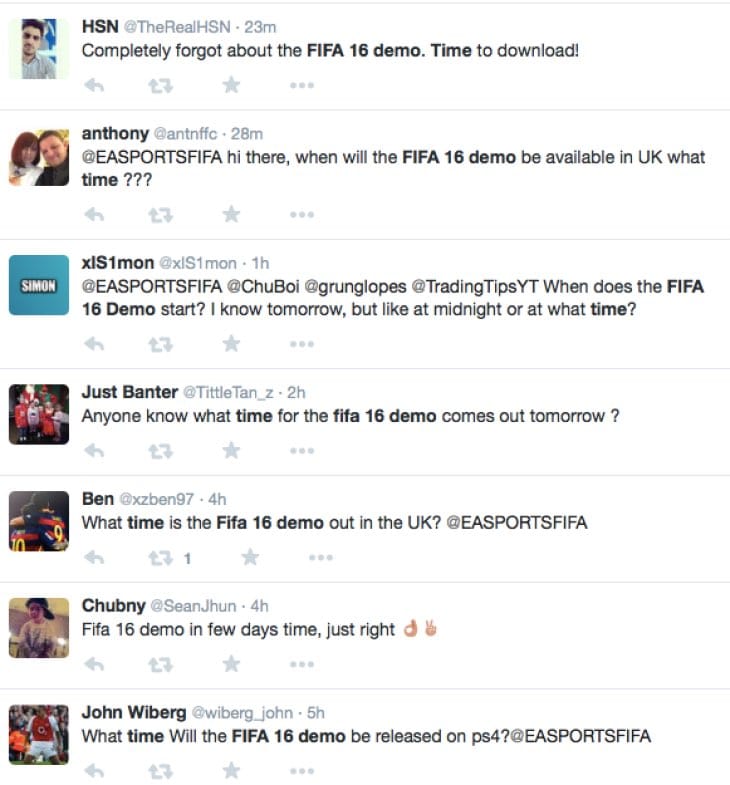 We have seen Sony update the PS Store at around 5PM in the UK on a Tuesday, so this could be a rough guideline on when the FIFA 16 demo is available for PS4 on September 8 – obviously no guarantee though.

It’s a shame that EA can’t give fans an exact time, but we see all the time that developers are at the mercy of Sony and Microsoft when it comes to content hitting stores.

Are you waiting for the exact release time for the FIFA 16 demo download on PS4 and Xbox One? If we do hear an exact time from either EASportsFIFA or ChuBoi Twitter accounts – we will update this with additional information.

In the meantime, let us know how excited you are for the demo. Don’t forget to check out the ongoing debate regarding Liverpool player Coutinho and whether he should have had 5-star skills in FIFA 16.