Another week is coming to a close which means that we are getting ready to find out what time the FIFA 16 Winter Upgrades Week 3 are out for FIFA 16.

EA took longer than expected last week to go live with the Week 2 upgrades, but it was exciting when they finally did as Lewandowski, Di Maria and Higuain all received upgrades.

For those that needs a heads-up, the Winter Upgrades for Week 3 should be out after 10am UK time. This was the schedule last week, but EA took longer to actually put the players into the database. 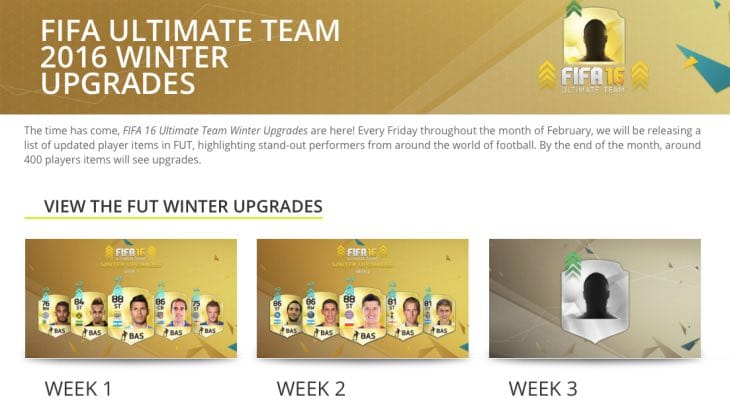 You can keep track of the release by following EA’s Twitter page here, but after 10am is a good time to start looking. What players are left to upgrade by EA, since we now just have two weeks of upgrades to go?

Jonas still hasn’t been upgraded, so we hope he makes it into the FIFA 16 Winter Upgrades Week 3 list. You could argue that Zlatan Ibrahimovic should get an upgrade to 90 after his amazing form this season.

What about Mesut Ozil, who would like to see him permanently upgraded in FIFA 16? We have just hours to go until the Winter Upgrades Batch 3 list is live so leave your last minute predictions below.