We have a heads-up to those that are currently powering their way through the ranks on the Black Ops 3 beta for Xbox One and PC. Treyarch has given players an indication for when the fun will officially be coming to an end and allow the developers to make tweaks before the full game launches in November.

As expected, the beta on Xbox and PC has followed the same pattern in terms of schedule that we saw with the PS4 beta. We know that many of you have been asking what time does the Black Ops 3 beta end in UK and US, so now we have the confirmation for you.

10pm Pacific Time on Monday is when US players will be cut off, meaning that those playing in the UK will have until 6am on Tuesday morning. 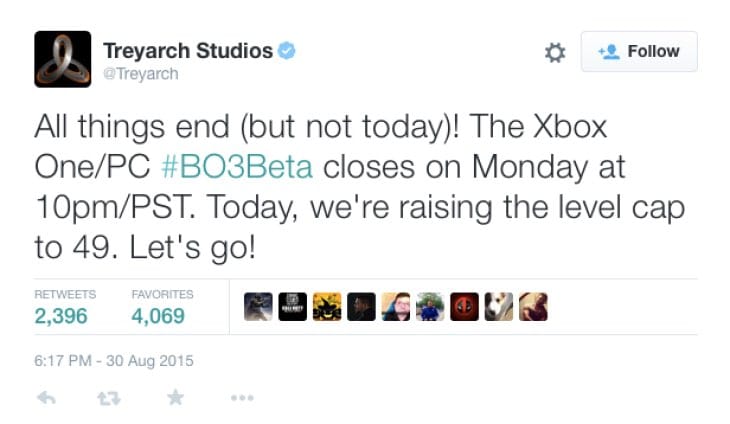 Along with that, players now have one day left to get to Rank 49 too as the level cap has raised. That also means that you have the chance to unlock the Mothership as a scorestreak reward if you are good enough – for those that want a preview of this, you can go here.

So there we have it with the official end time for the Black Ops 3 beta. Have you had a good time after the initial beta code issues?

Give us your experiences below.