The developer has given a heads-up that Xur is going to be a different experience every Friday now that The Taken King has arrived.

Specifically, Bungie has said that Xur will now choose either a specific Exotic Weapon or an Exotic Engram for sale every week – not a random community ‘loot drop’ as Bungie calls it.

The next major change to Xur is that he will also start selling a new consumable, with Xur’s Three of Coins, which can give bosses a chance to drop Exotic Engrams, including Weapon Engrams.

Finally, this is a big one. Xur will sell a Legacy Engram every week and inside this Legacy Engram will be a Year One Exotic with Year One Attack and Defense levels, with the exception of the Vex Mythoclast and the Necrochasm. 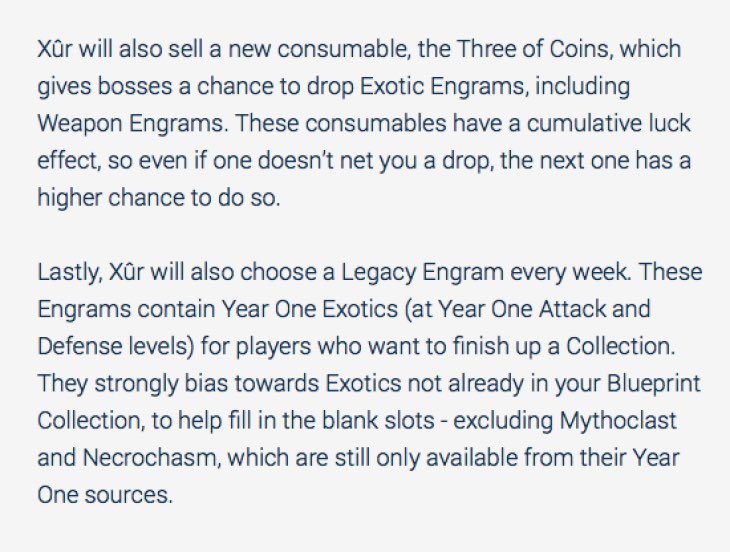 This is going to mean that Xur is once again the hottest ticket in town every Friday and all eyes are on what Taken King gear Xur will show up with and what Bungie really means when they say Xur will offer a specific Exotic Weapon.

Either way, we don’t have long to find out. As always, make sure to check Xur’s location on map here – especially since some surprises may be in store.

What are your expectations of Xur’s first arrival for The Taken King – what are you hoping to see appear on sale?

Come back at Xur’s arrival time here and we will update this with Xur’s inventory for 17/09/15. Also, don’t forget that the countdown is now on to the King’s Fall Raid too!

Update: Xur is live and he is has a treat for his first Destiny Year Two appearance. One surprise is The Impossible Machines exotic warlock gauntlets, while he also has a Legacy Engram, Insurmountable Skullfort, Young Ahamkara’s Spine and Exotic Engram.