If you own an Apple iPhone and need a waterproof case you’ll have no problem finding one, which is thanks to the massive range of accessories that cater for this need, but wanting an iPhone case for diving that delivers no water damage is something totally different. The range of cases that cater for deeper water submersion is a lot less, but there are some on the market for iPhone 4 / 4S.

One of the most popular underwater iPhone cases that hit the headlines a few months ago had been the TAT7 iPhone Scuba Case, which allows the diver to reach 100ft/30m and use the camera underwater for videos and pictures. Strangely enough you can apparently send SMS and a text thanks to Siri on the 4S model, although this obviously wouldn’t be while diving.

You can see a video below this article that shows the TAT7 in action while Scuba diving, but things might have changed a little since this video had been shot. The iPhone has had a new iOS 5 update that changed the way we open the camera, and as one person put it “there’s no way to use it” with the latest iOS update, which is due to having to swipe to activate the camera. We have not had the chance to run tests, so this is based on feedback from users.

We have also heard from a customer that bought the TAT7 (around $80) just a few days ago, and they said “followed the instructions and the case failed on my first dive“. It’s worth noting they had been using the iPhone 4S, so considering feedback from users the TAT7 needs a little refining to make it work with the latest iOS 5 / iOS 6 beta. 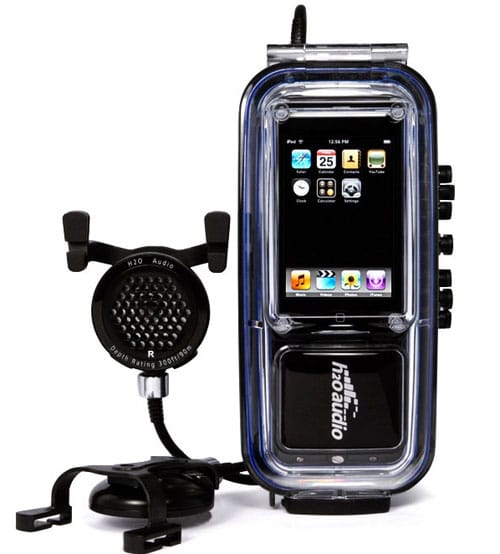 Another deep diving waterproof case is the iDive 300, which can be seen in the photo above and even includes speakers. This is a much more advanced option and retails around $350, which allows the user to dive at a maximum of 90m/300ft. Features include a built-in amplifier, over ear speakers, and an integrated microprocessor for push button control of Apple’s click wheel and touch screen iPods.

We cannot confirm if the iDive 300 works with iOS 6 or the latest iOS 5 update, but looking at the official website it shows they’re working on a new model, so it does seem the manufactures are keeping up with Apple updates.

What do you think about underwater phone cases, and have you ever dived with one?