A hugely popular application which lets users enjoy their XviD movie or TV series has recently been updated. CineXPlayer 1.6 is available for owners of the iPhone, iPod Touch and iPad.

Released by NXP Software the app has a great easy to use interface, and gives users the ability to play their videos in iOS without any need to convert them. The update has seen the interface unclutterd, and video support has been vastly improved. Users have complete control over the playback, and can even lock rotation for watching in bed.

A single tap will return you back to your library, and there is a great resume option which allows for watching a movie from the place where it was stopped. Anyone using iTunes built-in file sharing option can drag and drop AVI or DivX files straight to the device. CineXplayer has also received many positive reviews from users. 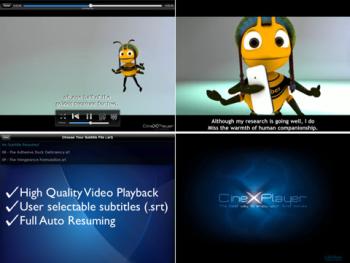