We have some very good news for Watch Dogs fans now, as Ubisoft has finally emerged with a solid release date on the action surveillance game that hopes to knock GTA V off its open world perch. Ubisoft has already confirmed Assassin’s Creed 4 for a release at the end of October. Now we know that Watch Dogs won’t be far behind it with a release at the end of November.

Without further ado, we can confirm that the highly anticipated current and next-gen title will be available to buy or download on November 19, for those living in the US. UK gamers will have to wait a few days as normal and will be able to get Watch Dogs on Friday November 22.

To celebrate the release date announcement, Ubisoft has unleashed a brand new trailer for Watch Dogs, giving us another glimpse of some new gameplay showing main character Aiden Pearce and some of his motives behind his actions against the city. Unsurprisingly, Ubisoft has also followed the same patterns with Assassin’s Creed and have decided to offer games with no fewer than four special editions of Watch Dogs. 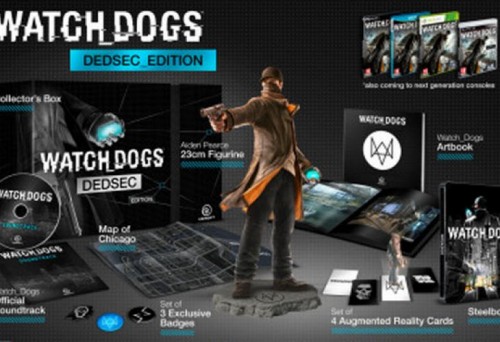 Pick of the bunch is the Dedsec Edition, which comes with a 23cm Aiden Pearce Figurine, collector’s box, the official soundtrack, 4 augmented reality cards, an artbook, steelbook and finally three single-player missions on top as well. There’s also a Vigilante Edition which comes with goodies such as Aiden’s cap and mask, for those that are willing to pay extra for that.

The Dedsec Edition is clearly the highlight of the two packs, but it will also end up being the most expensive. Ubisoft hasn’t set any prices yet, but expect to pay in the region of $100 for it like most other limited edition packs. We’re guessing pre-orders and pricing will become available during E3 2013, when Ubisoft will be showing off even more of Watch Dogs.

For now, watch the new footage above and let us know if you’ll be buying the game on November 19.