Warhammer 40,000: Space Marine has been out roughly one month, therefore it is about time that we started hearing downloadable-content information from Relic Entertainment, well right on cue Relic’s dev teams have come up with the goods and we can reveal to you the first-ever details regarding the Chaos Unleashed DLC.

This content is said to consist of a new Exterminatus mode which is aptly called Chaos Unleashed, here you play as a Chaos Space Marine and battle it out against the Ork and Imperial Guard. The DLC also gives you access to three new maps: Aquila Canyon, Habs Ablaze, and Station Tertius – not only this but we are told the Capture the Flag will be added to the game.

We can also confirm that upon purchasing this content you will have access to new co-op arenas, boss rounds, and enemy units and new skins will be purchasable for the Alpha Legion, Blood Angel, Legion of the Damned, and Salamanders – these will cost 240 Microsoft Points / £2.39 each. You can find out more over at SpaceMarine.com. 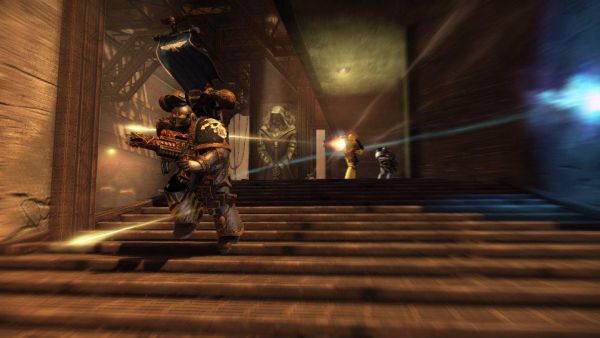 Chaos Unleashed will hit Xbox Live, Steam and the PlayStation Network sometime in December, but no specific date has been given, however we do know that it will cost 800 Microsoft Points / $9.99 when it finally arrives. This is the first lot of Warhammer 40K: Space Marine DLC which comes with a price tag, therefore it will be interesting to see just how well it sells, perhaps it will determine whether more packs will be released in the future.

In our opinion the new content sounds promising, but some are wishing that Relic would throw in a few new weapons to mix up the action, perhaps this is being saved for the next DLC release – we can but hope.

Will you buy Chaos Unleashed?