When it comes to fighting games you got to love Street Fighter, the classic game had teens hooked in arcades for years and later on games consoles. While this fighting game is a classic it had no real guts, then we have Mortal Kombat that was prepared to go where most games would not. Ripping heads off, chucking swords on the floor then throwing the other player towards them so they tear in half is all in a days work for Mortal Kombat.

The gameplay does not hold back when it comes to the amount of blood, and this is no more evident than when you perform Mortal Kombat 9 fatalities. Where do these developers get their ideas? While it’s pretty sick/cruel/imaginative you have to admire the job they have, creating the most disgusting ways you can kill the other player in a game must be an interesting job.

While we love the current MK9 fatalities, which include chopping every part of the gamer with a sword, toasting the other player with fire, pulling out a gun and shooting the other guy/girl in the head, and turning into a dragon to finish the other player. These are just a few of the vast amount of fatalities already playable thanks to NetherRealm Studios.

Now we can see that these developers are very creative, but how sick is your mind? What MK9 fatalities have come across your mind, which you feel should be in the game? While I’m sure you can think of better ideas than us, some fatalities we’d like to see include turning the other player into a zombie and seeing them eat themselves, releasing a pack of dogs that tear apart the opponent, and also a return for one of Shang Tsung’s boss morphs, as his Kintaro morph in Mortal Kombat 2 was excellent.

Let’s hear it, what MK9 fatalities does your mind hold? 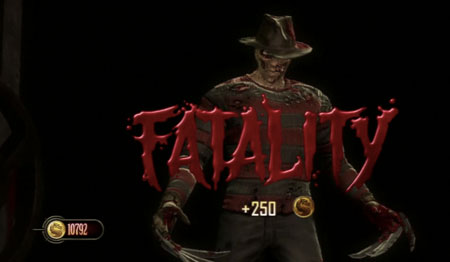