One major consideration for Android smartphone users that want to upgrade this year is the Samsung Galaxy S4, which is being promoted with the tagline of a Life Companion. Samsung believe their Galaxy S4 will make your life more fun, rich and simpler, but will this release date be as successful as the S3?

False lead for Apple and iPhone 5 — while it’s no secret I’ve owned every iPhone since the first generation, we shouldn’t be led into a false growth comparison when comparing Samsung and Apple from Nov 2012 to Feb 2013.

Apple Insider has reported that Apple extended their lead on Samsung and gained on Google in the U.S. smartphone market, which while true is not the full picture. During this timeframe the Apple iPhone 5 only just released, and millions of Android users were waiting for news on the Samsung Galaxy S4. This fact alone has helped create the results reported.

Taking a look at the share of smartphone users by brand — the table below sums up the total mobile subscribers for Apple, HTC, Samsung, LG and Motorola. It is worth noting that Samsung and Apple were the only smartphone makers to show growth in this period. 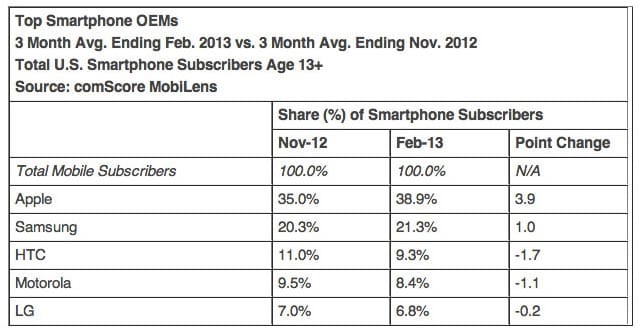 Samsung state the “GALAXY S4 is there for you“, so we’d love to know if our readers want the S4 in their pockets this year? You can read a little about the Verizon Samsung Galaxy S4 release date in this recent article. More insight into the recent growth for each smartphone maker can be seen via Apple Insider.