Many car manufacturers are developing and releasing electric vehicles, as ways are sought to move away from the traditional internal combustion engine. Today we have news of another manufacturer, as the Volvo C30 Electric release nears as production begins.

Eric Loveday of Autobloggreen is reporting the company has announced that to start with the battery powered vehicle will be delivered to customers in Europe. This includes Belgium, Netherlands, Norway, and Sweden. Volvo has stated they will have built around 250 electric C30s by the end of next year, but could increase the number if demand is high enough.

The C30 Electric is being built at the company’s plant in Ghent, Belgium, and is then sent to Goteborg Sweden. This is where the electric motor and lithium-ion battery pack is installed. Volvo claim the C30 has a range of around 93.2 miles with a top speed of about 80.8 mph. it also claims to have a 0 to 31mph time of four seconds. 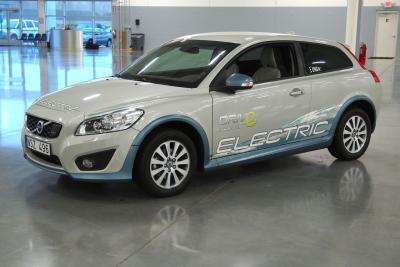 While it may have impressive figures for performance pricing is a bit on the steeps side. Volvo plans to lease the C30 for about $2,100 a month, without the option to purchase one. So over three years this will set you back $76,674.

Do you think there will be much call for the C30 Electric?