The Detroit Auto Show 2011 is now underway and Volkswagen has wasted no time in unveiling the Chattanooga-made 2012 Volkswagen Passat, this car will compete with vehicles such as the Honda Accord, Mazda6, Kia Optima and the Toyota Camry, in fact TimesFreePress has dubbed the new Passat “the camry fighter”.

The car is pretty nice to look at and almost looks Jetta-esque, we have embedded a photo of the Chattanooga Passat below, however if you check out KickingTires you can see a full gallery of images. 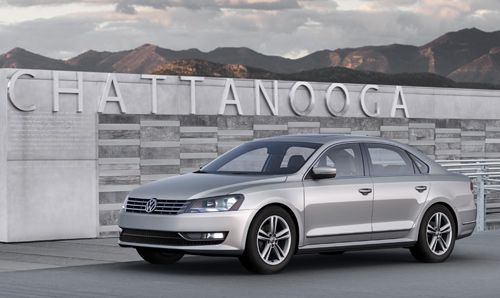 Volkswagen recently previewed the new Passat at the annual Detroit-based show, one YouTube user has uploaded a video showing the official preview, you can watch it here, VW’s Jonathan Browning mentions that last time round they lost their way in the North America despite thriving in Europe, however hope that the new Passat will get them back on track.

As with most vehicles these days there will be different engines and transmissions options available, such as a 2.5-liter five-cylinder engine (170-hp) with either a five-speed manual gearbox or six-speed automatic, alternatively you can choose a 2.0-liter turbo-diesel engine (140-hp) with a six-speed direct-shift gearbox. Finally if you are a bit of a petrol-head there is a 3.6-liter V-6 engine which will deliver 280-hp, this is paired with a six-speed DSG as well.

Full pricing and release details are currently unknown, however we are led to believe that prices will start at $20,000 and will arrive at dealerships later this year.

A recent Bloomberg post suggests that VW has forecast a 5 percent sales growth in 2011 and say that expansion in the U.S., India, China, Russia and Brazil will be needed to achieve this target, if the 2012 Passat is a success we could potential see Volkwagen become the World’s largest automaker rather than just being Europe’s largest automaker.

It will certainly be interesting to see if the 2012 Chattanooga Passat will bring Volkswagen success in the U.S., what do you think?