The Samsung Galaxy S II has been available in the UK for some time now. It topped the chart in the smartphone sales during its first week on the market and had, prior to its release, taken over 3 million pre-orders, making the company’s fastest selling smartphone ever. Now the device is set to launch again this time with a new look, as Vodafone look to get first dibs on the white Galaxy S II.

As far as we are aware the specs of the handset will be exactly the same, as this what normally happens when a different colored edition of the same device is released. The only exception will be it is now sporting a sexier, more fashionable color chassis. Though you won’t be getting anything extra with the white version, if you have not yet got the world’s thinnest dual-core smartphone, then this will make you the envy of those who have already snapped up the arguably more boring black model.

The likelihood is that you will also be getting a much cheaper deal with the Galaxy S II than existing owners did as the handset has been out for some time now, not that it is any worse off than other smartphones on the market. As Engadget explains, Vodafone are now offering it up at no extra cost, whether black or white, on a £35 per month, two year contract. If you would prefer a cheaper contract you can also pay £199 for the phone and get it on a £26 per month, two year contract.

For those of you that have been debating whether or not to get the Galaxy S II or have been patient enough in waiting for the white version of Samsung’s answer to the iPhone, the time has now come for you to get it and at a more reasonable price. Go out and make your fellow Galaxy S II owners jealous. Check out the link above where you will be able to place your online order.

Will you be getting a white Samsung Galaxy S II? 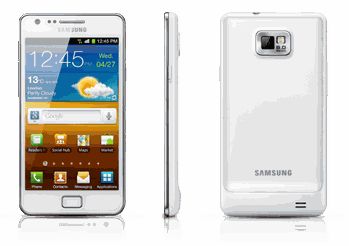