Piracy is a crime that occurs all too often these days. The industry most affected by it at the moment is films but music and games piracy is on the rise and not far behind. The latest research has found that video games piracy in the UK has increased by 20% since 2006 which has some people worried for the future of the industry.

The research was found by the firm Envisional who claims that the top five games last year were illegally downloaded nearly one million times from the internet, an increase of 20% from last year. According to the trade group UKIE, illegal downloads are costing the games industry a billion pounds each year, a figure that if not addressed could lead to companies closing down and perhaps even an industry meltdown. They also claimed the figures showed ‘that for every game that is sold, four will have been pirated.’

The research also found that since 2006 Films and TV show piracy has increased 30% while music album saw a decrease. While there is no official explanation as to why music piracy is on the decrease, Develop points out that a rise in ‘convenient music streaming services, such as Spotify, could be a key factor.’

Claims that every copy of a pirated game being downloaded equals a sale lost have caused arguments amongst both those who are against the crime and those who defend it. This is because when a pirated game is downloaded there is no evidence that suggests that had that game not been free and available it would have been bought instead. At the same time some people use illegal downloading as a means of testing a game they are unsure about, therefore a copy of a pirated download could in fact lead to a purchase that may not have happened otherwise.

What are your thoughts on video game piracy? 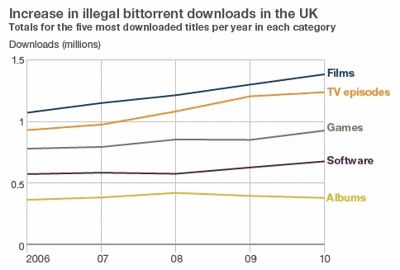