We just received an update from Viber Help in regard to the iOS app crashing when users turn contacts on. If you use the Viber iPhone app, then you might have tried to activate contacts and experienced the problems mentioned that have been officially confirmed to exist.

The popular application allows Android and iOS users to connect via video, text, and voice worldwide for free over 3G and WiFi. In fact, more than 400 million people user this service around the globe and benefit from massive savings when connecting worldwide for free while mobile. The company behind this app make money by charging for Viber Out, which is a premium service to make low cost calls to non-Viber mobile and landline numbers. 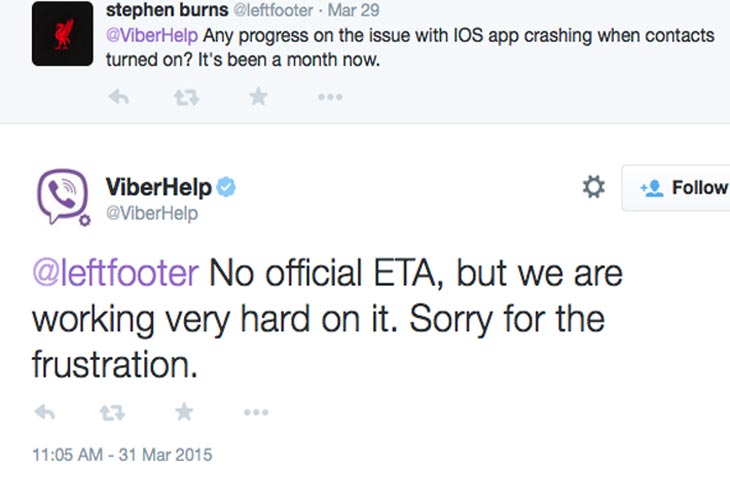 Fix being worked on for iOS crashing – you can see a tweet above that the official Twitter account left on March 31, 2015. It not only confirms the problems with Viber’s iOS app, but also that a fix is being worked on for the crashing issues. It seems the glitch started after the previous update in February, so this has caused upset for around a month now.

As you can see above, there’s “No official ETA” for a fix, but they are “working very hard on it”. While the company is “Sorry for the frustration”, we do wonder if this is enough for some users. Leave your comments below, especially if you have experienced crashing yourself.