We have details on a great new application for the Apple iPhone now. It’s called Viber and will let users make phone calls to each other completely free, over a 3G or WiFi connection with no catches.

As reported from Tech Crunch, Viber is available from the App Store now and takes seconds to install and set up. It makes use of VoIP technology and push notifications to allow you to make calls with superior audio quality higher than that of regular GSM calls.

In a way, Viber is what Skype should have been, as we all know that Skype still doesn’t offer free calls to other Skype users at the moment. As long as two iPhone users have the Viber App installed and each other’s numbers in their contact lists, you’ll be able to make free calls, as many as you want over 3G or WiFi.

Best of all, you don’t need to add users to make use of the service. As long as they have the App installed and the contact’s number, Viber will automatically detect that another person is using Viber – similar to the way that WhatsApp works.

You can read full details on the benefits of Viber over at TechCrunch, but we can already predict that this App is going to be a major success, particularly since it works with international calls too. Check out the video promo below and let us know your thoughts on Viber. 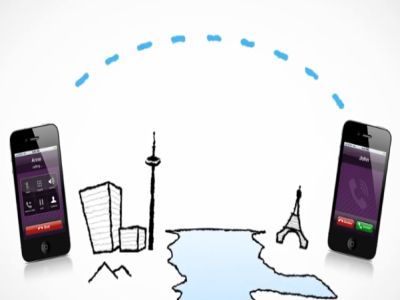 Is it one of the best Apps on your iPhone?