While all the talk lately is of an impending Jelly Bean update for the Samsung Galaxy S3, it appears that Verizon may finally be starting to take the first steps in providing their long awaited update to Android 4.1 for Galaxy Nexus owners.

If you’re not aware, the GSM Galaxy Nexus has already received an update to the latest version of Android and LTE owners are still waiting for their update after Google promised that the update would be landing on all Nexus devices.

That means of course that it is up to the carriers to push them out to consumers and so far, there has been plenty of frustration over Verizon’s infamous waiting game. A glimmer of hope has emerged in the form of a new software update that is appearing on some Verizon Galaxy Nexus devices, identified with a new build number of JRO030. 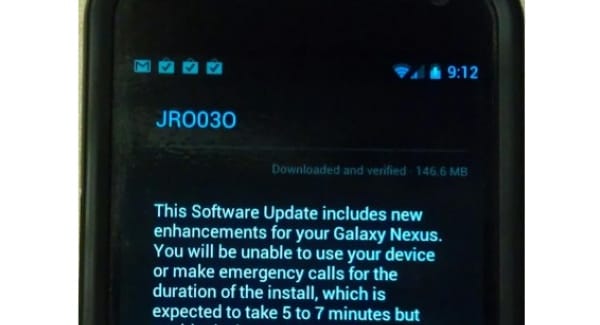 The guys over at Droid-Life have suggested that this is the update to Jelly Bean, but the important thing to note though is the that the person who received the update may be using a test version of the Galaxy Nexus. That means that the update may not be available for a little while longer, but it could be a great indication that Verizon will be releasing the update for everyone soon.

There’s no harm in heading to your settings page to try and push the update manually though, so get back to us with your results. If you do happen to see a new update available and it is 146.6MB in size, then consider yourself lucky as you have just been updated to Jelly Bean early.

Would this give a little credibility back to Verizon in your eyes if the update is definitely releasing soon? So far, there’s no word on the update for Sprint Galaxy Nexus users either, so we’ll update you if we hear anything regarding that.

Do you see an update notification on your Verizon Galaxy Nexus?