Today we can finally officially confirm some groundbreaking news for you all, the iPhone 4 is coming to Verizon Wireless, this was announced roughly 15 minutes ago by Verizon’s Lowell Macadam.

Apparently Verizon and Apple have been working together since 2008 on a CDMA iPhone, by the looks of things the Verizon iPhone 4 will be pretty much identical to the AT&T version, however inside there will be changes to allow it to connect to Verizon’s network. 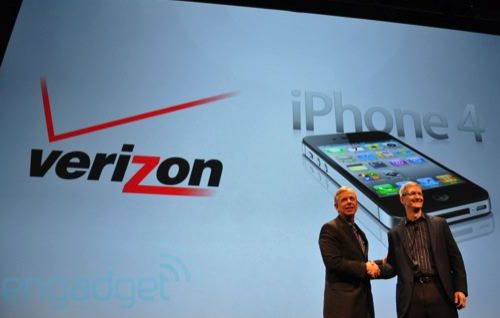 Apple’s Chief Operating Officer Tim Cook was at the official unveiling, he stated that Apple were extremely happy to be working with Verizon and also went on to say that “this is just the beginning of a relationship between Apple and Verizon”.

During the announcement Verizon suggested that have tested over 1000 Verizon iPhone 4 smartphones and very happy with the results, also they claimed that their robust network will be able to handle the huge demand the iPhone 4 will undoubtedly put on it. If you want to find out more about the Verizon iPhone 4 check out Engadget’s liveblog.

What do you think this news means for AT&T?