Over the last few months there has been a huge amount of news surrounding the Motorola Droid 2, we now have some official details which finally clear up how much truth there was to the rumors.

Earlier today Verizon release a press release for the Motorola Droid, we can confirm that pre-sales will begin tomorrow (August 11), to pre-order yours head over to VerizonWireless.com.

Spec wise there aren’t any real surprises, out of the box it will run Google Android 2.2 (FroYo), it will feature a 3.7 inch display which supports multi-ouch gestures, also it will come with 8GB of internal storage as standard with an 8GB microSD memory card, however will support a card of up to 32GB, giving it a maximum of 40GB of storage.

I will list some other specs for you here, Adobe Flash Player 10.1, 3G Mobile HotSpot capabilities (support for up to five simultaneous connections), 5-megapixel camera, physical QWERTY Keyboard (with raised keys), better processing power than the original Droid (1GHz as apposed to 600MHz), you can find out more specs here (scroll down to the press release).

If you want the Droid 2 it will be available online tomorrow (August 11), alternatively you can pick one up from Verizon stores on Thursday (August 12),it will set you back $199.99 as part of a two-year deal (taking into account a $100 mail-in rebate).

There are plenty of contract options available, you will at least require a talk plan which costs a minimum of $39.99 per month and an email and web plan for $29.99 per month, if you want to use the 3G Mobile HotSpot service you will have to pay an extra $20 per month.

If you check out the source link below you can see Verizon’s full press release, also we have embedded a high-res image of the smartphone. 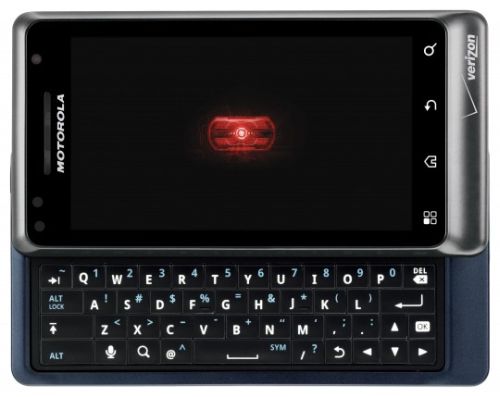