So the Verizon iPhone 4 is finally here, and although we were a little confused that Big Red did not wait until the iPhone 5 version, we still have to be thankful that we have it at all. Those who will want to purchase the CDMA version of the iPhone 4 will want to know what the key differences are between that and the AT&T version.

One of the biggest differences is with the design of the antenna, which as we know is still the cause of dropped calls. Current iPhone 4 users on AT&T have to use a case or bumper in order to make a call. However, the Verizon version has the black bands at the top, so no fear that your hand will touch them while making calls. 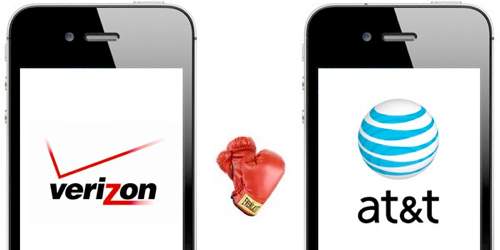 Another difference and one that I like the idea of is Wi-Fi hotspot support via the HotSpot app. This will allow you to connect up to five other devices to share your 3G connection. This is something that AT&T has yet to offer their iPhone customers. InfoWorld is uncertain if this will incur an extra cost.

There are differences with the plans themselves as well, but we have seen one that goes in favor of AT&T. Those with an AT&T iPhone 4 will be able to take advantage of an early upgrade, whereas Verizon customers will not; this could persuade them to wait until the iPhone 5 is released.

According to Chris Ziegler from Engadget the AT&T iPhone also offers simultaneous voice and data on 3G, but Verizon does not. This however is not a negative thing, and will help to improve voice calling for Verizon users.

iSource points out that AT&T offer global roaming, something that we know Verizon will not. If you are still undecided as to which network you want to purchase the iPhone 4 on, then maybe this network coverage map will help you decide? However, the biggest differences we cannot see. What we mean is the technology used to connect to 3G, which you can read in detail on the Mashable website.

These are just some of the key differences, now it is time for you to stop wondering when a Verizon iPhone is released and ask if you are ready for the change from AT&T to its rival?