We have some fresh details just in now, and it’s a bit of a bombshell as we’re hearing that Verizon is planning to announce the Apple iPhone next Monday, on November 8th. We have an image to show you which could back up these claims.

According to this Ripten report, Verizon is now sending out corporate emails, stating that a mystery ‘iconic device’ will be announced next Monday. There are no actual mentions of the iPhone in the email, but Verizon repeatedly label the handset as an ‘iconic device’.

Here is a portion of text from the email flyer: ”An iconic device is a device that is projected to be in high demand once officially announced on November 9th 2010”.

As far as we’re aware, this is the first time that Verizon has acted in this way, as their previous corporate emails just go ahead and name the selected device anyway, why have they made the effort to label this particular device ‘iconic’, over six times in one email?

And before you ask, this is probably not the Samsung Continuum, as that is meant to be due for announcement on Sunday, one day earlier. Take a look at the email scan below and let us know your thoughts on this – do you have any ideas? 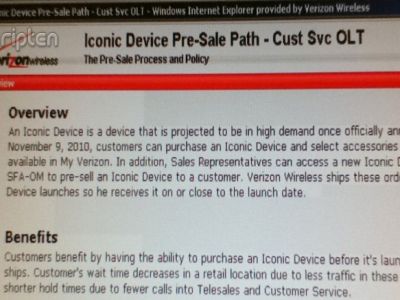