After months of speculation and rumors Verizon have finally released the HTC Thunderbolt today.

The much waited for handset has just gone live on the carrier’s website for $249.99 with a two year contract. If you would rather have it SIM free it will set you back $599.99. The lovely looking device comes with Android 2.2 and a single core 1 GHz Snapdragon processor.

The screen is a big 4.3-inch with 480×800 resolution, and round the back you have an 8-megapixel camera and a LED flash. On the front is another shooter at 1.3 megapixels, and has 8GB of in-built memory that can be expanded up to 32 GB via an additional micro SD card.

Probably the feature that everyone will be wanting is the LTE capability of the handset, which will allow for the fast transfer of data on the Verizon 4G network. You can find the order page for the HTC Thunderbolt on Verizon here. 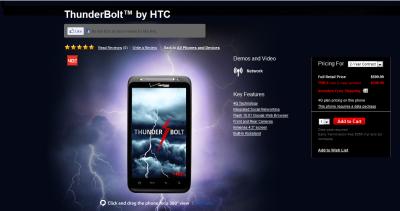 Are you going to but the HTC Thunderbolt from Verizon?