HTC has been busy releasing Android-based smartphones this year, however most (if not all) of these devices have featured virtual QWERTY keyboards rather than physical, however it looks like this will soon change.

Photos and specs of a new HTC smartphone have recently shown up on Android Community, the photos aren’t great but clearly show a smartphone with a slide-out four-row keyboard, along with a large touchscreen display.

We are reliably informed that this nameless smartphone will feature offer both CDMA and GSM connectivity and will most likely launch on Verizon in the U.S. and on Vodafone in the UK, chances are sometime during Q1 2011.

Details are pretty scarce at present, however sources suggest that it will run Android 2.2 FroYo as standard, and will most likely be upgradeable to Android 3.0 (Gingerbread) in the future, the OS should be pretty snappy as rumors suggest that a 1.2GHz Qualcomm Snapdragon may be used.

As we hear more we will keep you post, for more information and three photos of the upcoming device check out the source link below, we have embedded one of these photo underneath. 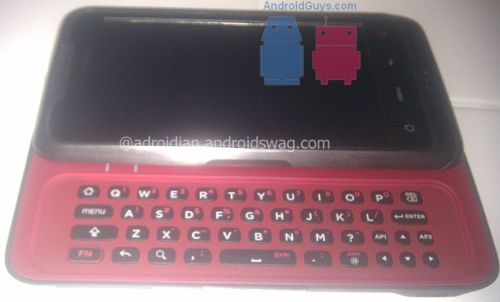