We have some good news for those of you who have decided to pick up the Droid RAZR M smartphone from Verizon. Some of you may have been disappointed to find out that the device shipped with Android Ice Cream Sandwich, but you’ll be pleased to hear that it now looks like Motorola and Verizon will be providing an official update to Android Jelly Bean by the end of this week.

New details have emerged, suggested that the update may even become available within the next 24 hours, with rollouts occurring on Thursday 18 October. It’s possible that the official date may have been pushed forward, due to reports that the same update leaked over the weekend, allowing some Droid RAZR M owners to update ahead of schedule.

This Thursday is also the very same date that the Droid RAZR HD and RAZR HD MAXX are due to go on sale, but sadly it’s another two new Android handsets that will be shipping with the same outdated Ice Cream Sandwich software. A lot of consumers are skeptical over the rate on how Motorola keep churning out these Droid RAZR smartphones, but early indication suggests that the Droid RAZR M is one of the best available. 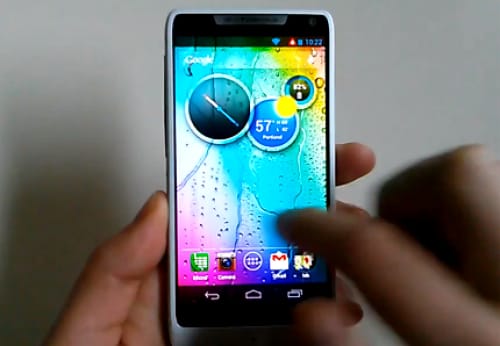 Given that the handset only released mid last month, it’s a positive outcome that the official Jelly Bean update will arrive almost exactly one month later – none of the same shenanigans that are taking place right now over on Samsung’s pond with Galaxy S3 users.

We’ve included a video below, showing you some of the instant interface changes you’ll see once you have installed Jelly Bean on the Droid RAZR M, although bear in mind this is based off a leaked version and may differ slightly when Verizon pushes out the official update before the end of the week.

If you have a Droid RAZR M handset at the ready, let us know if you have already received an official notification to update to Jelly Bean, or if you managed to jump on the leaked version that came available via Twitter over the weekend. Do you agree that it is now the best ‘RAZR’ handset available to buy?