With Verizon’s LTE network impressing us a little bit more every day we thought some of you might be interested to see a new netbook which the U.S. carrier recently officially announced, this is the Compaq Mini CQ10-688nr and it is the first-ever 4G LTE netbook which has ever been available. 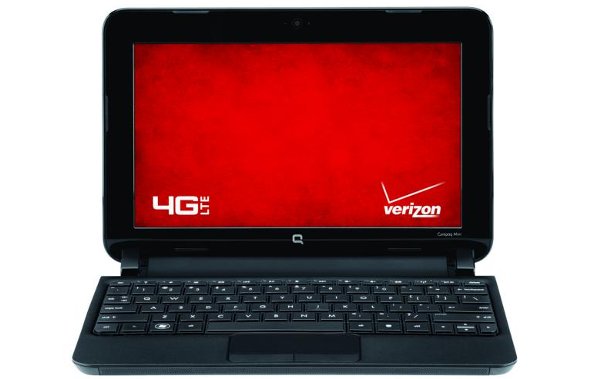 If you are worried about 4G LTE speed you should check out this article, it shows the Verizon Galaxy Tab 10.1 connected to Verizon’s 4G LTE network and it consistantly delivered around 28Mbps down and 8Mbps up, at one point it shot up to 44.44Mbps down and 9.39Mbps up – pretty incredible eh?

As previously mentioned this is Verizon’s first-ever netbook offering to feature built-in 4G LTE connectivity, however if your not a fan of the small form-factor which this netbook offer you should check out the HP Pavilion dm1-3010nr notebook here, it costs $599.99 as part of a two-year deal and boasts plenty of improved specs over the the Compaq Mini CQ10-688nr. Remember that this is a notebook not a netbook, therefore it not as portable as the new Compaq.

Does the Compaq Mini CQ10-688nr interest you? If not, what puts you off?