Choosing a smartphone in 2011 is a tough task, now we have another release date to tell you about, this is for the Verizon-bound BlackBerry Torch 9850 – the 9850 is the CDMA version of the BlackBerry 9860 which looked great in this video.

Nothing has been officially confirmed by Research in Motion or Verizon, however a leaked photo (sourced from vzbuzz) is doing its rounds on the web which appears to show Verizon’s inventory system showing BlackBerry Torch 9850 launch information, it clearly says “The Blackberry Torch 9850 will launch to direct fulfillment only on September 8, 2011. All channel launch will be on September 15, 2011”. 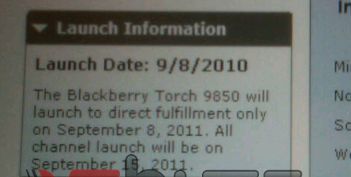 At first glance this looks great, but it could in fact turn out to be fake, in fact if you look closely it clearly states that the Launch Date is 9/8/2010 – this suggests that there has either been a typo or the image has been photoshopped. What do you think?

You can see full tech specs for this BlackBerry here, we are excited to see that RIM has seen the light and added a decent touch-smartphone to its list of offerings – we just wonder how the user experience will compare to the touch-centric Android, WP7 and iOS devices. Even before it hits Verizon the specs will not blow you away when compared to the competition, for a BlackBerry the single-core 1.2 GHz processor, 768 MB RAM and 4GB of internal storage sound great – but many smartphones readily available offer dual-core 1GHz+ processors, 1GB of RAM and 8GB of internal storage – could this be the 9850’s downfall? Or will Verizon take this into the account with the price? We can’t wait to find out.

If Verizon’s network does not interest you the Torch 9850 will be coming to Sprint, it has been confirmed that Sprint will sell you the 9850 for $149.99 when you agree a two-year agreement, this price does take into account a $50 mail-in rebate – we wonder how much Verizon will charge.

When we hear official pricing and release date information for the Verizon BlackBerry Torch 9850 we will keep you posted, how much are you willing to pay?