If the rumors from the last day or two are to be believed, we should be seeing a Verizon Announcement for iPhone 5G within days, although some readers may be thinking that we have heard all this before, but have we?

Product Reviews has reported rumors for a possible iPhone on Verizon Wireless more times than I care to mention, and we know many U.S. phone users see numerous advantages over AT&T, and now thanks to some solid rumor by WSJ again, we may finally find out that Verizon is getting the iPhone 5G.

Yes that’s right, we say iPhone 5 / 5G because it will take new hardware and any Verizon announcement for iPhone must mean new hardware, which would hopefully have an improved antenna to stop problems found in iPhone 4, and a more powerful processor amongst other specs. 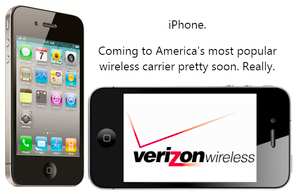 If Verizon do announce a partnership with Apple, then it will be highly unusual that we would see any new hardware before WWDC 2011. It will be interesting to see how this so-called Verizon / iPhone partnership unfolds, and how it will impact the mobile marketplace. You can read Tech Crunch’s take on the changes coming to the mobile landscape in their article here, and the latest WSJ rumor can be read in their article that makes a bold claim for this week.

Tech Blorge look at the need for a Verizon iPhone after weak Android sales, which shows that Verizon have been chasing the iPhone for a while now. How do you think the iPhone stacks up against the army of Android phones?

Something big is coming, but do you think WSJ are right and Verizon will announce an iPhone partnership in 2011? One thing that we’re almost certain of, iPhone 5G will not be unveiled for a few months yet.