Recently we suggested that it looked as if Verizon Wireless would roll-out their 4G LTE network on Sunday, 5th December 2010, now we can confirm that this has been officially announce by Verizon.

Engadget were following the Verizon 4G LTE new event live when the announcement was made, you can see a breakdown of what Verizon had to say here, also if you check out Verizon’s official website you can also see further confirmation of the launch date (we have embedded an image showing this below). 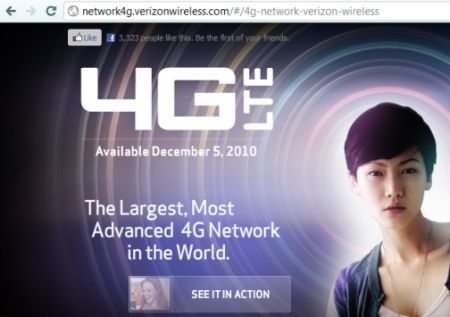 On December 5th there will be no smartphones available which will connect to Verizon’s 4G LTE network, however there are 4G modems which will allow high-speed internet connectivity for netbooks and laptops etc, we will keep you posted as we find out more about a 4G LTE compliant smartphone release.

To be honest with you the fact that there is no smartphone release tied in with the 4G LTE network launch is quite odd, however it at least allows Verizon to roll out their new network and test it out with a relatively low amount of stress, let’s just hope a smartphone release isn’t too far away.

Will you be looking to buy a Verizon Wireless 4G LTE network when one arrives?